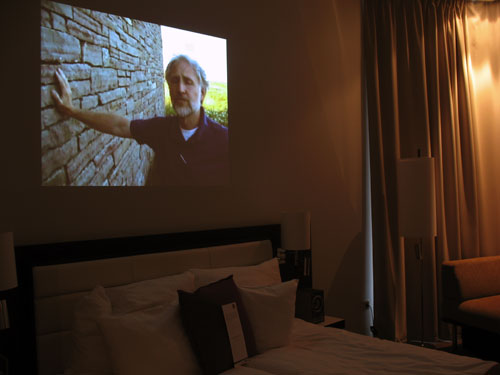 Happiness of History and Place

Video loop, 19,19 min, projected on the wall in one of the hotel rooms.

The film begins in 1997 as a conversation with the archaeologist Ingemar Persson. At the time he was the director of one of the most debated and expensive archaeological rebuildings, the Eketorp Fort on the island of Öland. The film emphasises his view of his place of work and the landscape in which it’s sited. In the following sequence the conversation continues in the same hotel room at Clarion in which the film is actually projected, recorded just before Christmas 2008. The conversation, now eleven years later, evolves around his relation to Stockholm where he once lived and his professional life since we last met.

Happiness of History and Place wants to shape one of the fundamental premises of film, namely the ability to move time and space. It can be seen as an equivalent to a sculpture with it’s given site; it’s made for this very hotel room in the context of Supermarket. The film can also be seen as a story of identity and belonging in relation to a place.